Cornell researchers are using high-resolution satellite imagery to monitor and document endangered and damaged cultural heritage in the South Caucasus, where an ethnic conflict between Armenia and Azerbaijan has raged for decades.

“After the first Nagorno-Karabakh War [late 1980s to May 1994], the government of Azerbaijan erased virtually all traces of Armenian existence in the region of Nakhichevan,” including medieval churches, sacred cross stones and tombstones, Khatchadourian said. She noted that although the destruction has been documented by international scholars, it is disputed by the government of Azerbaijan amidst the unresolved conflict over land and identity, which flared again into a 44-day war last fall.

Russia brokered a ceasefire between Armenia and Azerbaijan in November 2020, but the postwar situation remains volatile, Smith said. As a result of the terms of the ceasefire, sites of cultural significance – some up to 1,600 years old – now fall under Azerbaijan’s jurisdiction. He said many international scholars are concerned that new threats to cultural heritage may now loom for sacred Armenian sites in Azerbaijan.

The first report from CHW published July 7. And the CHW project dashboard went live the same day, showing the numbers and types of sites under surveillance at any given moment, as well as their current findings. Its database includes more than 2,000 sites across an area of 12,000 square kilometers, hundreds of which are under active monitoring. 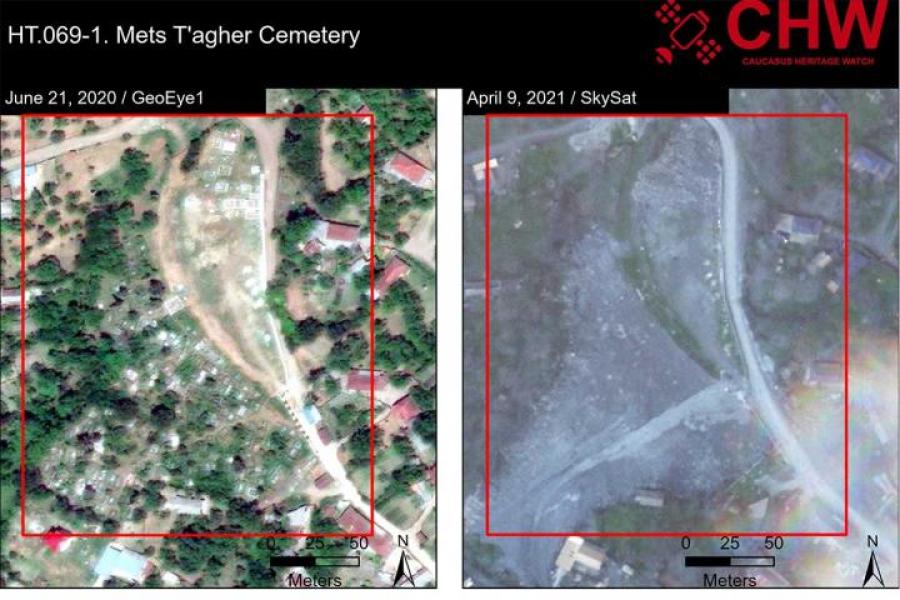 Provided Satellite images of the Mets T’agher Armenian cemetery in Azerbaijan, founded in the early 19th century, showing evidence of destruction between June 2020 and spring 2021.

The CHW team is using a satellite constellation called SkySat, operated by the company Planet Lab, to collect imagery of specific locations during the year in order to detect changes to heritage sites that might indicate damage or destruction.

As the report documents, Smith said, “the most at-risk sites are monuments related to the long Armenian presence in the region, including churches, monasteries, cemeteries and other sites from pre-Christian periods through the early 20th century.”

For example, satellite images in the June report show damage to Ghazanchets’ots Cathedral in the town of Shusha (or Shushi), corroborating eyewitness statements of an artillery attack on the building in October 2020.

CHW’s report also reveals the destruction of the Mets T’agher/Böyük Tağlar Cemetery, including evidence of bulldozers grading the site, pushing “earth and funerary materials” into a large berm. The report confirms that the 18th-century Aygek Mosque was destroyed by an Azerbaijani road crew, with May 2021 satellite images of the area showing a blank space where a building had been in September 2018.

CHW also has highlighted a number of sites that are at risk, such as the 7th-century Vank’asar Church, shown with heavy equipment parked nearby. A fragile 19th-century church is shown in satellite images 50 meters from extensive earth-moving operations.

“The proliferation of high-resolution satellite imagery has changed the ways in which archaeologists respond to cultural heritage crises,” Khatchadourian said. “New technologies make it possible to document damage and destruction almost in real time.”

Archaeologists used satellite imagery during the Syrian Civil War to monitor looting and bombing of sites in Syria and Iraq, providing a precedent for CHW, Smith said. Similar techniques have been used to document cultural loss elsewhere, most recently in the Xinjiang region of China.

“We are contributing to this field by offering another model and new methods that can be adopted in regions where the destruction of cultural heritage is part of state strategies of ethnic cleansing,” Khatchadourian said.

CHW’s three co-principal investigators hope that by raising international awareness to this particular conflict, they can help protect heritage sites in this region and provide a model for addressing similar problems in other regions of conflict.

The first goal of CHW is truth-telling: “Investigating and monitoring past and future damage to cultural heritage can contribute to the work of truth and reconciliation,” Khatchadourian, Smith and Lindsay write in their report. “In contexts of war and genocide, cultural aerospace can bear witness to the condition of cultural heritage sites,” providing facts to counter state denial and working toward social repair in conflict zones.

Other goals include deterring state acts of cultural destruction and holding governments accountable to the international community. The development of innovative new technologies to enhance monitoring of sites on a large scale and over the long-term is one of the key research objectives of the work.

“At CHW, we are rethinking what it means to do engaged archaeology,” Khatchadourian, Smith, and Lindsay write in their report. “The return of conflict and destruction to the [South Caucasus] region was not unexpected, but it collided with our sense that archaeology must do more than simply dust off the detritus of the past … It must use its skills to advance the public good, deter abuses of power, call out aggression against past remains and living communities where it can, and provide forensic evidence of heritage abuses where it must.”

Funding for the CHW project comes from Cornell’s Department of Anthropology and Department of Near Eastern Studies, Purdue University, the Aragats Foundation and the Armenian General Benevolent Union.

We Celebrate our Class of 2020 Alumni